It is proposed to build a massive industrial-scale wind farm of 17 huge turbines, each 119m (390 ft) high (how tall is this?), on the hill-tops above Dunoon. These enormous turbines would be built on the Kilbride Hill range and extend from above Bishop’s Glen as far as Garrowchorran Hill above Innellan, all on Forestry Commission land. 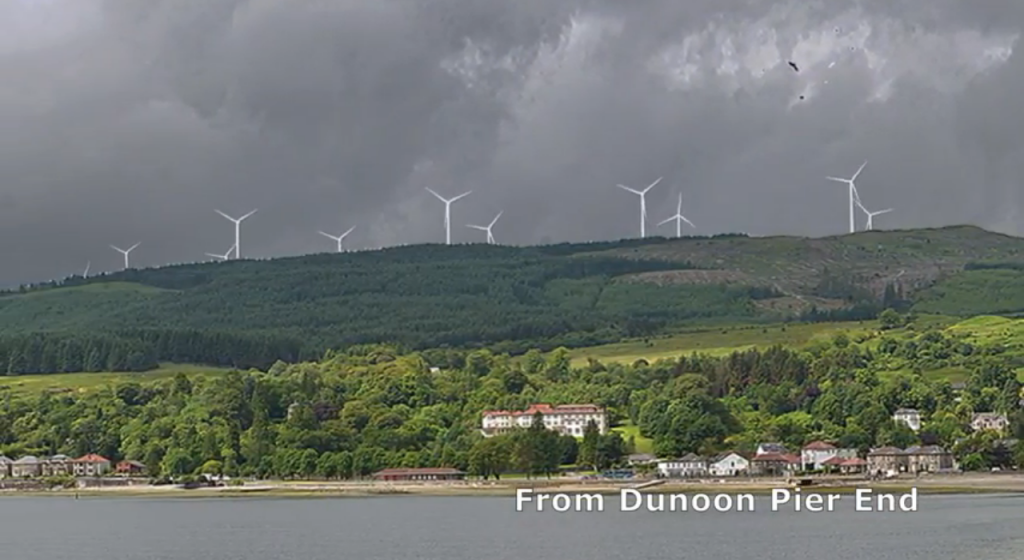 The proposed wind farm would be overpoweringly prominent, visible across vast areas of the Inner Clyde Estuary affecting not only the residents of Cowal and the Inverclyde Coast but also visitors to the area and those travelling by ferry or cruise ship or road. In rejecting a similar but smaller wind farm proposal on these hills in 2009 the Inquiry Reporter was quite clear: “Because of its conspicuous position on the spine of a peninsula the wind farm would have unacceptable adverse impacts on visual amenity”.

This ‘Bachan Burn wind farm’ proposal is similar to that which threatened Cowal’s Hills in 2014/15 but is now put forward by Brookfield Renewables, part of a multinational conglomerate which bought out PNE’s renewable energy interests.

Save Cowal’s Hills is an umbrella group of concerned residents who came together in 2014 in opposition to the original Bachan Burn wind farm proposal and who remain committed to ensuring that Cowal’s special landscapes and scenic beauty are protected from intrusive, inappropriate, or damaging development. We have no objection to sensibly scaled and sited renewable energy projects but are firmly convinced that the Bachan Burn wind farm is (in the words of our local MSP) “the wrong proposal in the wrong location”.

Preserving the beauty of our natural heritage

Everyone working at Save Cowal’s Hills is a volunteer but we do incur administration costs. A £5 or £10 donation will go a long way to help meet these costs.