Save Cowal’s Hills (SCH) is an umbrella organisation which brings together local people who wish to protect our cherished natural landscape from inappropriate and damaging development. It was organized in 2014 in response to the proposal by PNE Wind for an enormous industrial scale wind farm (Bachan Burn) on the hill-tops above Dunoon. Proposals for smaller but similarly located wind farms (the Corlarach Hill and Black Craig schemes) had been rejected in 2009 by two separate Public Local Inquiries as being inappropriate for the location and damaging to visual amenity and the local economy. People were understandably distressed, and outraged, that the Bachan Burn proposal was being put forward only five years after smaller and less intrusive proposals had been officially rejected.

The Objective of the ‘Save Cowal’s Hills’ group is to support conservation of Cowal’s high quality landscapes and therefore to oppose proposals for inappropriately sized or sited developments, by all effective and legitimate means, including:

The ‘Save Cowal’s Hills’ Group supports deployment of low-carbon energy sources, including appropriately scaled and sited wind turbines. SCH strongly opposes the Bachan Burn proposal, however, because it is so massively out of scale and so obviously wrongly located – and hence would cause irreversible damage to the local
natural environment, landscape and economy. Bachan Burn is opposed because it is “The Wrong Proposal in the Wrong Location!”

A Steering Group of 10-15 people undertakes to guide and facilitate the activities of SCH, and this group meets about once a month. But when important activities must be organized, a much bigger network of supporters can be called upon. For example, when Dunoon Community Council sponsored a public meeting (13 March
2015) to debate the Bachan Burn proposal, SCH mobilised supporters to prepare information posters and photographs, to distribute flyers, and to help mobilise an attendance of several hundred people. This was the only large, open-to-all public
meeting on the wind farm proposal – which the audience overwhelmingly rejected. 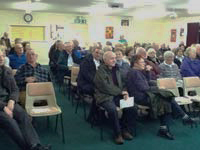 Preserving the beauty of our natural heritage

Everyone working at Save Cowal’s Hills is a volunteer but we do incur administration costs. A £5 or £10 donation will go a long way to help meet these costs.